Finding an affordable house is no longer a problem but qualifying for a mortgage can be. Six tips to getting a mortgage and a good rate. Put your credit on ice. The higher your credit score, the lower your rate: The best rates go to those with a 760 or more, says credit-score expert John Ulzheimer.

To read the entire newsletter, click HERE!
Posted by Elaine Beery at 7:01 AM

Here is the Market Report for the period ending October 2012.  For a more thorough understanding of how the market is shifting and how this affects you, please give me a call and we can discuss it in more detail.

Sellers:
October did not follow the trends of the prior two years where we saw the number of closed sales drop Instead, October saw a 7.4% increase over the prior month. The statistics show that we had 6,232 residential homes sell in the month of October in Maricopa County. It will be important to watch this trend over the next few months to see if there is a continuous shift in trends compared to the prior years.

Buyers:
For buyers, this means that competition for homes remains even higher, as more homes sell and are no longer an option for buyers. We continue to see homes sell well above list price AND cash buyers continue to have an edge where there are bidding wars, especially when homes are priced below $150,000. Buyers should continue to carefully work with their real estate professional to understand the market AND how they can compete with the market demand and other buyers who may be in a financial position that is more appealing to the seller.

To say thank you to all the Veterans-- a group working for you!

Once our military men and women come home and try to become a part of society they have a lot of challenges and this group is determined to help with housing, vocational studies and all of the other things that seem to challange these great men and women who served our country in one of the hardest times to do so!!
I want to get the word out to let them know there IS help and each and every one of us Americans appreciate all you did for us!!  Click on the article to read more…
http://www.dsnews.com/articles/hed-veterans-find-assistance-with-national-organization-2012-11-12
Posted by Elaine Beery at 8:43 AM

Well it is that time again....Time to "Fall Back"

Come early Fall, many people in the U.S. wonder when exactly that old phrase "Fall back, Spring forward" will come in handy for daylight savings. In 2012, Daylight Saving Time, as it is formally called, ends on Sunday.  Fall back! Daylight Saving Time for 2012 will end on Sunday, Nov. 4, when clocks will be set back at 2 a.m. in the United States. 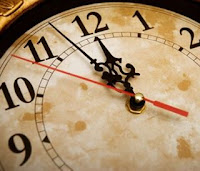 Daylight Saving Time for 2012 is coming to an end this weekend on Sunday, Nov. 4, when clocks will be set back at 2a.m. giving us an extra hour of sleep.

On Sunday at 2a.m., you'll move clocks back one hour and gain 60 minutes of extra time, sleep or partying that morning. However, if you go to bed early, it is recommended to set clocks back an hour before, to ensure the proper time when you wake up. Some electronic devices, like smartphones, automatically change to daylight saving time, so no need to set those iPhones back.
However, many U.S. states do not observe daylight saving time, like Arizona, Hawaii, Puerto Rico, the Virgin Islands, American Samoa, Guam, and the Northern Mariana Islands.
For many years, Daylight Saving began much earlier than November. In 2005, the Energy Policy Act altered the start and end dates of daylight saving time. The new act went into effect in 2007 and changed the dates in an attempt to save energy; From then on, clocks were set forward on the second Sunday of March instead of the first Sunday of April and set back one hour on the first Sunday in November rather than the last Sunday of October.
Many fire departments encourage U.S. residents to use Daylight Saving as a time to change batteries in smoke and carbon monoxide detectors, as well, as a precaution.