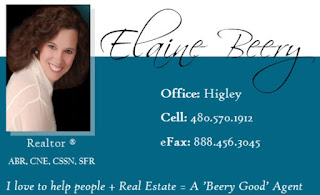 5 Reasons the Holidays are a Great Time to Sell

After falling to a 13-year low during the second quarter, the homeownership rate posted a highly unexpected rise in the third quarter, according to a Census Bureau report released Wednesday.

With foreclosures forcing homeowners out of their homes and buyers waiting on the sidelines as home values declined, the homeownership rate has been on the decline for quite some time. In fact, according to Bloomberg, the third quarter rise is the first in two years.
To read more, click HERE


By Kerry Curry
Gradual improvement in the housing market is expected next year, with existing-home sales edging up 4% to 5% and new home sales getting an even bigger boost off this year's record lows, the chief economist of the nation's largest real estate group said Friday.

"Tight mortgage credit conditions have been holding back homebuyers all year, and consumer confidence has been shaky recently," Lawrence Yun, chief economist of the National Association of Realtors, said. "Nonetheless, there is a sizeable pent-up demand based on population growth, employment levels and a doubling-up phenomenon that can’t continue indefinitely."
To read more, click HERE

To Read the entirety of my newsletter, please go to my Facebook Page.